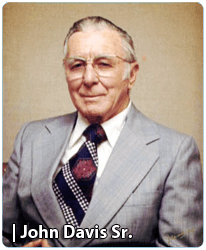 John Davis is a long-standing and well-respected Southern Alberta businessman and owner of numerous auto dealerships throughout the province.

He embraced a career in the automotive industry, following in the footsteps of his father, John Sr., the one-time owner of Scougall Motors in Fort Macleod. After marrying his lovely wife Barbara in 1968 and starting a family, John Jr. moved home to Fort Macleod in 1975 to take over management of the Scougall dealership.

In 1989, John purchased the former Enerson Motors and moved his family to Lethbridge. The renamed Davis dealership enjoyed a high measure of success and, in 1999, John and his team were able to expand to the newly constructed and much larger location on Crowsnest Trail. The Davis Automotive Group has celebrated 40 years of growth and innovation in the auto industry. It now employs nearly 500 people and has been recognized two years in a row as a Top 50 Employer in Canada. 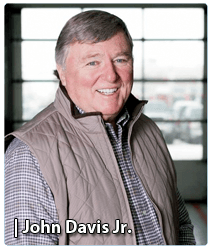 John has shared his success by supporting numerous local charities and organizations, particularly in the area of amateur sports, education and health.

Tim, Mike and Luke, John and Barbara’s three sons, have carried on the Davis auto legacy, operating the Davis stores in Medicine Hat and Lethbridge. This has allowed John to spend more time doing some of the other things he loves, including fishing, puttering on his farm near Coalhurst, attending sporting events and spending winters with Barb and friends in Arizona.

John says the key to his success has been loving his work and surrounding himself with talented people who shared his goals. In addition to his good fortune in business, John says he is most grateful for “family, friends, sunsets, good books…it’s a long list! If I continue to receive more of the same I will be a lucky man”.